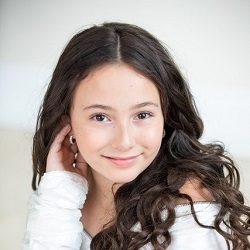 Roberta Battaglia is a dynamic, up-and-coming young vocalist from Toronto, Canada. Born into a musical family, 13-year-old Roberta began her singing career at the astonishing age of three years alongside her father, Alessandro Battaglia and together the duo has graced many stages from local community performances to galas and noted charity events. A second-generation Italian Canadian, Roberta is fluent in both English and Italian and performs a diverse repertoire of music in both languages ranging from ballads and top-40 hits to high-octane pop.

Roberta has studied her craft via academy singing instruction and has already contributed to commercial productions while receiving recognition in noted competitions such as 1st runner up at CNE Rising Star. She was also Sofia Vergara’s Golden Buzzer Winner on season 15 of America’s Got Talent, placing fourth overall in the finals. Her special independent appearances include a performance at Idea City presented by television mogul, Moses Znaimer as well as Toronto’s Breakfast Television where her rendition of Lady Gaga’s Shallow ‘broke the internet’ resulting in over two million views in only two weeks – an outstanding accomplishment for a nine-year-old.

Passionate and well ahead of her time in both skill and maturity, many consider Roberta an old soul who utilizes her many talents for the greater good. Roberta recently launched her own charitable initiative designing bracelets while donating 100% of the sales to Toronto’s world-renowned SickKids Hospital. “It’s about kids helping kids,” explains the philanthropic artist. “I just want to see people smile. I love making everyone happy.”

We wish to thank you for your hospitality and the wonderful program and tour of Project Harmony. We are so fortunate to have an organization acting on the behalf of our children with such outstanding enthusiasm and dedication.

Thank you so much for coming to Children’s and speaking to our staff. Your talk on “Understanding Poverty” was excellent, and I could see “wheels turning” as some staff members commented on simple ways their interactions might make a difference for children and parents.

I have felt that my input has been highly valued and respected when it comes to doing my job, and that is something that speaks volumes to the working environment here at Project Harmony.

We began collaborating with the Project Harmony through their Connections program last year, and we’ve continued the partnership. Connections represents an extremely valuable partnership and an opportunity to provide our students with a bridge to mental health services.

Our experience and partnership with Project Harmony/Connections has been fantastic! It is a comfort knowing we have a partner who can connect our students and families with the appropriate resources in times of crisis or trauma.

This shadowing experience actually made me very interested in this field. One aspect that helped me narrow my choice of careers is the environment that Project Harmony had. It was very upbeat, cheerful and bright.

We would like to take this opportunity to thank Project Harmony for planning and delivering professional development to our 70 counselors, social workers and community counselors. We feel fortunate to have such a valuable resource in our community to partner with.

At our last D2 Center Board meeting, I was describing the training and professional development we provide for our staff. At the top of the list was Project Harmony. Please know that you are providing an invaluable service to nonprofits in our community.

Congratulations on the great media coverage of your Stewards class at Project Harmony on WOWT. You did a great job articulating the importance of prevention, and Susan was amazing too. Thank you so much for your partnership and all the important work you are doing.

Just wanted to know that you made a difference in my life, and I will be using that momentum to make a difference in the lives of others. You are truly a rock star and a role model for me. Thank you for a new life I’m getting the chance to live.

Many children through my caseload have received a backpack generously donated to the Project Harmony Triage Center. I have witnessed many faces light up when given the opportunity to pick out a new backpack, and I am very grateful for the generosity of the Junior League.

I have never felt as valued at other organizations like I do at Project Harmony. I really feel that the culture of a working environment is incredibly important. If an employee feels respected, valued and supported, that person will likely give more to fulfill the mission.

Nick and Javier were great teachers and role players. It gave us an opportunity to see how someone in that situation would have reacted to our questions. They did a great job at showing us the difference between sympathy and empathy.

I was able to shadow Mr. Nick Zadina. He was in charge of dealing with abused kids and help them. I am thankful to know all the information I learned during shadowing because it was eye opening.

The experience at Project Harmony was a deepening reminder of empathy that will be vital in my career as a nurse. I felt my perspective was widened on how others think, especially when discussing the assumptions we make.

As difficult as a removal is on a child, the backpack they receive at Project Harmony provides a sense of belonging and hope. It truly is amazing something that seems so simple can change the perspective and shine light on these children.

Great leadership for a wonderful cause with outstanding long-term goals. Keep on doing all the good you do.

Project Harmony is the reason I started my journey in college. I just finished my associates and I'm going for my bachelors now in Child Protection and Juvenile Justice. Y'all helped my daughter back in early 2013 and I knew what I wanted to do with my life — help children.

A young lady who works in our field told me that she loved what we do here at Project Harmony — she had been to Project Harmony seven years ago for a forensic interview. She said her positive experience was the biggest reason she is doing the work that she is today.

I found out that my foster son is going to have a forensic interview here at Project Harmony soon. It’s been interesting being on the other side of things and feeling so reassured that the child I care so deeply about is in very caring and capable hands.

Nick demonstrated how one person could impact a huge group of student nurses by just attending his presentation. He gave me the reason, the courage to act, and the knowledge how to save victims that I will face in my future nursing career.

I recently attended the Testifying Training course. Since that class I have been subpoenaed three times, and I had to testify at each hearing. Without this class I would have been less than prepared and too nervous to be credible. Thank you so much!

You are part of the solution.

The cycle of abuse does not have to continue, but we can’t end it alone. Anyone has the power to be someone who makes our community a safe place for all children.